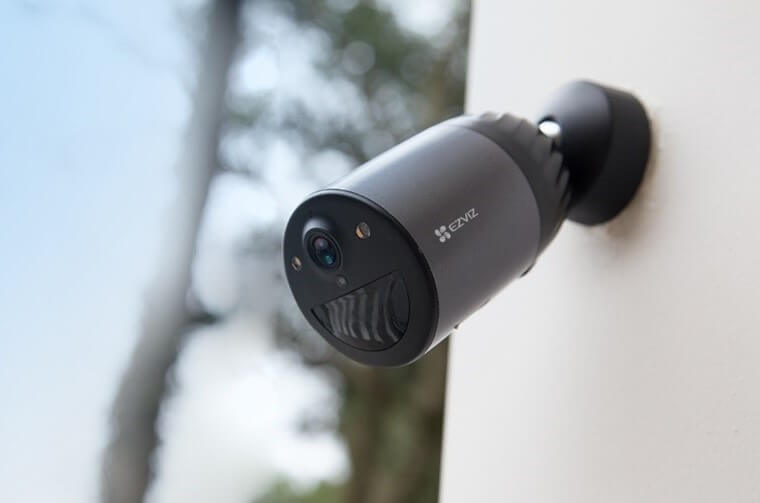 Surveillance camera are video recording devices that are used for the purpose of observing an area. User can view camera footage on smart devices such as smartphone, tablet, or computer from anywhere using an internet connection. Most surveillance camera are motion-activated and will record when they detect motion, as well as send you an alert.  There are two types of security cameras: wired and wireless. Wireless security cameras use Wi-Fi to transmit surveillance footage to a cloud-based server over the internet. This allows you to view the footage on any internet-connected device. Note that many wireless cameras are not entirely wireless because they need to be plugged into AC power via a power cable, although some use rechargeable batteries instead.

According to a 2019 research by Global Web Index on global smart home market landscape, Vietnam is in the world top 10 markets with highest smart home product ownership rate, together with Singapore as the only 2 Southeast Asian countries in the list. Noticeably, 46% of Vietnamese smart home product owners have smart security products (eg. remotely controlled doorbell or security camera), the highest ownership rate in this segment among world researched markets. Statista[1] estimated the revenue of Vietnam smart home market in 2021 is worth 260m USD and will reach 524m USD by 2025, 22% of which accounts for the security segment where security cameras and smart locks are dominant.

In terms of revenue growth, after the dramatic boom in the past 4 years with the peak of 70% growth rate in 2018, the smart home market is expected to slowly reach its stable growth period in the next 5 years at 14%. Remarkable drop point in the revenue growth rate is predicted to follow the impact of COVID-19. “Comfort & Lightning”, “Home Entertainment” and “Security and Surveillance” are the three segments with least growth rate drop. Despite being still in its infancy state, smart home device market penetration is expected to grow from 2.7% in 2019 to 7.8% in 2023.

Looking at the security camera market specifically, eventhough the ongoing outbreak of Covid-19 has made the estimated CAGR decreased from 12.4%[2] as estimated in the previous period of 2016 -2022, the market still enjoys a relatively high CAGR of 8.6% for the period of 2020 – 2026 according to 6Wresearch, which still appears appealing to both international and domestics investors to consider the Vietnam surveillance camera market[3].

With the increasing penetration of internet, especially 5G technology, Vietnamese consumers, especially the growing middle class group, are expected to have higher demand on smart home technologies. Together with the participation of Vietnam in many FTAs, the average import tax for security cameras is as low at 5% on average, with many country origins benefits from import tax exemption such as ASEAN countries, Australia, China, Japan, Korea… This has resulted in the more affordability of video surveillance devices to many Vietnamse households and organizations in a market that is currently dominated by international players.

Latest data by B&Company Vietnam shows an import value of over 27 million USD for Wi-Fi security camera in 2020. This segment is heavily dominated by 3 international brands with 95% of total import value, among which EZVIZ takes up 52%. With more than 40 models serving both indoor and outdoor surveillance demand at a wide pricing range, integrated with its cloud service and IoT technology, EZVIZ has become a popular choice, fitting various purposes and segments. Specifically, EZVIZ outnumbered the other 2 brands in top 3  – IMOU and KBONE – in the 2 leading segment of Outdoor Wi-Fi camera and Indoor Wi-Fi camera for the total import volume in 2020. This statistic data indicates a significant domestic preference towards innovative technology integrated camera models, in which EZVIZ seems to have a better competitive advantages for R&D. Japanese brand Panasonic, on the contrary, only accounts for less than 1% of total import value in this segment.

On the other side, domestic brands such as BKAV or VNPT seem to take a different approach targeting oversea markets due to its limitation in local market penetration under agressive competition of foreign brands. VNPT, the Vietnam state-owned telecommunications corporation, and BKAV, the country’s leading technology corporation in the field of cyber security, software, smartphone, smart home, are the two Vietnamese players to enter the surveillance camera manufacturing industry. VNPT Technology has developed its manufacturing capacity of upto 5,000 cameras per day, but yet to reach such production volume in reality. According to Nguyen Tu Quang, CEO of BKAV, after this first launch in the US market, the company is planning to tap into other European and Asian markets and hopes to reach 100 thousand cameras in quantity in 2021. After more than a year of investment, the company has researched and developed 39 families of cameras.

Besides the rising demand for household uasage, other key drivers behind this growing demand include the rapid development of urban residential and commercial areas, transportation and infrastructure expansion, and the growth of manufacturing, banking, hospitality and healthcare sectors. In early 2021, Vietnam governement announced its smart trafic initiatives with the plan to invest almost 87 million USD into the traffic camera system nationwide including its 60 expressways and almost 130 national highways, aiming to enhance its traffic surveillance and social security[5]. Moreover, in recent years, Vietnam has been noticeably active in the implementation of “smart cities theme” and witnessing a boom in megacities, in which security enhancement through smart devices is one of the focus implications. According to Vietnaminsider[6], small apartments targeted to young families would be one important trend in the new supply of smart home at the current development phase. Many real estate developers have integrated smart home sulutions in their projects.

Based on a recent research by B&Company, Millenials, who are often ragarded as the tech-savvy consumers, are the group with highest intention to adopt smart home devices. Besides, the research also finds a rising demand among Vietnamese young working parents, especially in big cities, for indoor surveillance camera. This trend arises from the popular security concern towards small babies left at home being taken care of by grandparents or a nannies while the mothers have to get back to work after the 6-month maternity leave. Similar demand also rised from those who want to keep an eye on their senior family members living alone at home. These are some of the rather new usage of home surveillance camera besides its traditional functions.

Tapping into such many new types of demands, market leaders like EZVIZ have integrated in most of its Wi-Fi camera models with innovative technologies like encrypted cloud storage and AI, yet with considerably affordable pricing for most middle-income households. As a smart device, most of its Wi-Fi cameras can work with popular AI virtual assistant such as Alexa or Google Assistant. Many of its indoor Wi-Fi cameras allow users to observe their house simply by just one touch on their smartphone or tablet and even talk with their relatives at home using its realtime two-way talk function. With the enhancement of image sensors and modern image processing technology as well as other integrated system such as “EZVIZ Cloudplay” and “EZVIZ Studio”, a Wi-Fi camera has now emerged further from its traditional function of a security devices to become a daily smart companion, helping its users to connect with their home while faraway or to record, store and share memorable family footage.

On a different note, with the rising concern on cyber privacy and to comply with the current Cyber Security Law requiring users’ data to be stored in Vietnam, there exists recommendations by local ICT professionals regarding the need for stricter legal framework on managing imported security camera. This regulations request investors to build a solid system foundation in Vietnam, which not only helps to comply with strict regulations on user information protection but also provides a stable and convenient experience. To comply with this requirement, brand such as EZVIZ has established its EZVIZ  CloudPlay cloud storage services with both global and local, Vietnam-based cloud server capacity. With strict data security mechanism in place, it ensure users can view, store and share video easily with full privacy protection.

As the world is transiting into the 5G and IoT era, Vietnam will not be an exception. With 1.5 million Vietnameses joining the global middle-class population every year[7] and fast growing urbanization, B&Company believed that the surveillance camera market will continue to thrive. The door would be wider for those players that can develop an integrated smart ecosystem with innovation-driven products addressing the domestic specific market demand. In other words, “glocal” players possesses much more competitive advatages in various aspects including manufacturing capacity, R&D, and market-oriented mindset.