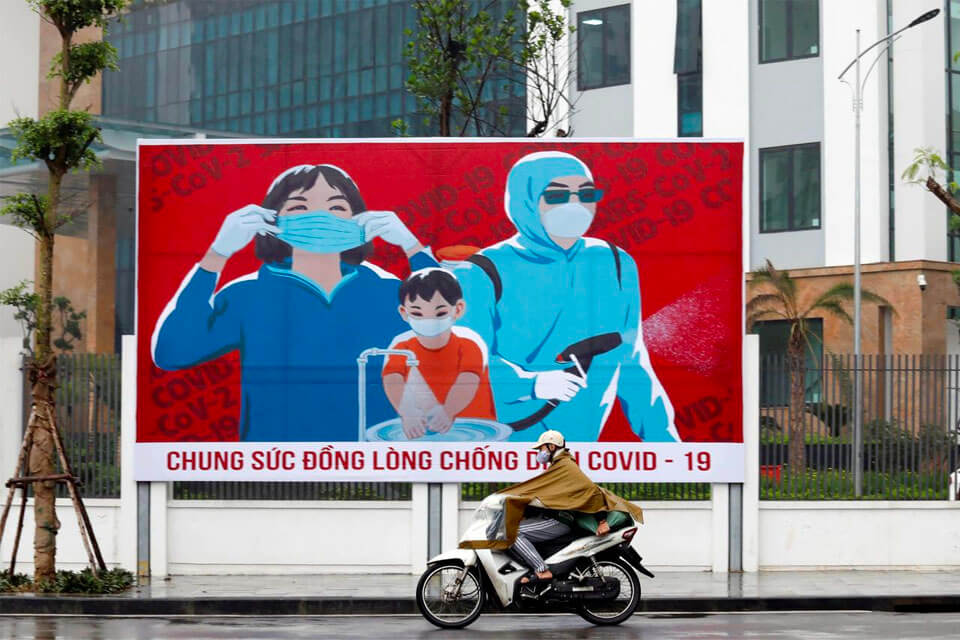 As of March 11, 2020 | Consolidated by B&Company Vietnam & BEAN Survey team
The COVID-19 outbreak has disrupted the lives of hundreds of millions of people worldwide only 2 months after the first case was found in Wuhan (China), creating uncertainty for the whole world. Since the mechanism of this virus has not been fully understood, no one could be sure until when the epidemic would last, let alone the consequent increase of economic instability.
When the disease outbroke in China, which is considered the world’s factory, it not only reduced the production of goods but also caused many other companies in the world to struggle because of the lack of components for finished products. Compared to the 2003 SARS outbreak, Chinese economy’s role is now much larger, thus global damage might be up to 160 billion USD according to the estimation from economics professor Warwick McKibbin of the Australian National University. Furthermore, right after China started to be able to restrain the epidemic, it again broke out at two other Asian economic pioneers – South Korea and Japan, then followed by countries in Europe and the US.

According to WHO, as of March 10, 2020, COVID-19’s case-fatality rate is estimated at 3.9% while its contagiousness is 2.8%, lower than SARS (3.0) but higher than Ebola (1.9%), MERS (0.8%). However, as COVID-19 seems to transmit even before visible symptoms occur, it is rated as more deadly than even SARS. A quick study conducted by BEAN Survey – an online survey platform in Vietnam – in 3 days from 8th February 2020 shows that 26% out of 181 surveyed Vietnamese respondents think COVID-19 is more dangerous than SARS and 61% believe it’s the same threatening as SARS.

Pessimistic feelings caused all global stock markets fall rapidly, USD currency has increased sharply (up 4% from the beginning of the year), gold prices rose the highest in 7 years backward, world oil prices have fallen low, sometimes down to 50 USD/barrel. The IMF predicts the world’s economic growth rate of 2020 would be lower than that of the previous year (2.9%). As of the case in Vietnam, COVID-19 firstly had impact on aviation, tourism, and service industry, followed by trade and investment, then manufacturing disruption.

Vietnamese economy is relying heavily on exports. According to the latest statistics of the General Department of Customs, for the first 2 months of 2020, after closing the border with China and strictly tightening imports with many highly virus-infected countries, total revenue from import and export taxes was estimated at USD 2.17 billion, down nearly 8% compared to the same period of 2019. Due to COVID-19, most of the import-export turnover of the items contributing the most revenue such as gasoline, computers, components, machinery, iron and steel … decreased in value but increased in quantity. For example, ore exports in February were estimated at 250,000 tons, up 42.6% in volume, but down 9.7% in value, reaching only USD 7 million. On agricultural side, China is the main consumer market of Vietnam’s agricultural products. In 2019, agricultural exports to this market reached USD 5.92 billion, accounting for 35%. The border control has brought many difficulties to agricultural products such as fruits (dragon fruit, watermelon, durian) and seafood. Furthermore, as the disease situation is getting worse in America, the United States Federal Reserve (FED) decided to cut 50 points on interest rates. Consequently, the USD/VND exchange rate has decreased, which brought along negative affect on Vietnam’s export to USA.

Aviation is one of the most affected industries from the COVID-19 outbreak. Taking a look around the world, many carriers including United Airlines, JetBlue, Lufthansa, etc. announced route closure. United Kingdom’s Flybe went into administration and it might become the first of many further airline bankruptcies. The International Air Transport Association estimated the airlines could lose up to USD 113 billion in revenue. Vietnam’s aviation industry is also facing the same downfall. As of February 26th, Vietnamese airlines have cut all flights to China, 92% of flights to Hong Kong, 41% to South Korea, and 34% to Taiwan. In particular, Chinese travelers account for 26.1% of the international transporting volume of Vietnamese airlines. Vietnam’s Aviation Department also calculated revenue of domestic airlines would expect to reduce more than USD 1.08 billion.

Cutting flights means cutting down a major source of tourism revenue. According to the General Statistics Office, in February 2020, there were over 1.2 million international visitors to Vietnam, down 37.7% compared to January 2020 and down 21.8% compared to the same period of 2019. Da Nang, one of the leading spots of Vietnam’s tourism, has total number of visitors in the first quarter of 2020 as nearly 1.3 million, down 31.2% over the same period of 2019. Centers of the economy like Hanoi and Ho Chi Minh City have also faced a significant decrease in the number of travelers. China is originally the largest source of tourist arrivals for Vietnamese tourism. Data from GSO shows that in 2019 Vietnam had 5.8 million Chinese tourists out of 18 million international visitors, accounting for 32%. South Korea is the second largest source (accounting for 24%), and Japanese tourists account for 9% respectively. However, in February, the number of Chinese tourists has decreased 62.4% comparing the same period of 2019. Even Vietnamese citizens also avoid traveling around and all the festivals have been cancelled. Many hotels in Hanoi have been closed. Even VinGroup, one of the biggest players, has temporarily stopped operating its 7 hotels in Nha Trang, Da Nang, and Phu Quoc. If this kind of situation continues, Vietnam National Administration of Tourism estimated the damage to the tourism industry would be about USD 5.9~7 billion.

While aviation and tourism got affected badly, the F&B and fashion industries are  also struggling with the domestic market. Not only reduce traveling, Vietnamese citizens also avoid eating outside and going to malls or markets. Indeed, according to Bean Survey, 79% said COVID-19 had been affecting negatively to their daily routines.

Evaluation of effects on each life

Moreover, 88% respondents also chose to not visit public places as a method to prevent the disease.

According to the statistics of a retail in Ho Chi Minh City, the number of visitors to shopping centers and supermarkets has fallen from 40-50% compared to before. The number of customers in restaurants also decreased by 20-30% on weekdays and 50% during weekend. This results in a 40% decrease of sales at department stores. Most shops are trying to maintain their business by offering appealing promotions and promoting the door-to-door delivery service. According to many shop owners, the number of online orders has increased sharply. On the other hand, businesses supplying organic food products and “immune boosting” products such as lemongrass, lemon, honey, turmeric, black garlic, etc. are thriving. Some property owners are considering to reduce 20% to 40% of the rent fee. Vincom Retail JSC recently announced its USD 13 million fund to support its tenants. However, some already lost to this economic crisis. Many businesses in Ho Chi Minh City have terminated their rental agreements. According to the Ministry of Planning and Investment, due to the impact of the COVID-19 epidemic, consumers are avoiding shopping in public places and the total retail sales of goods and revenue from consumer services in February 2020 dropped 7.9% compared to the previous month. Some delivery platform such as Now and Be has pushed and launched the feature that would allow the delivery men to go shopping for customers.

A lot of schools and universities have closed temporarily since before Lunar New Year. Concerns on a larger outbreak due to complicated school activities and the fact that small kids don’t have enough knowledge in self-prevention, many schools still remain close until mid-March and put online learning platform on trial. On March 3, 150 non-public educational institutions made urgent requests to the Prime Minister, ministries and agencies on support to overcome the difficulties of the current crisis, otherwise 90% of the facilities will become bankrupt because of unbalanced revenue and expenditure. With the preschool system, hundreds of bankruptcy establishments will lead to unattended, cared for children and parents’ work will be affected. Furthermore, trillions of VND would be lost and thousands of workers including teachers, staffs would lose their jobs if language centers and private schools were closed. 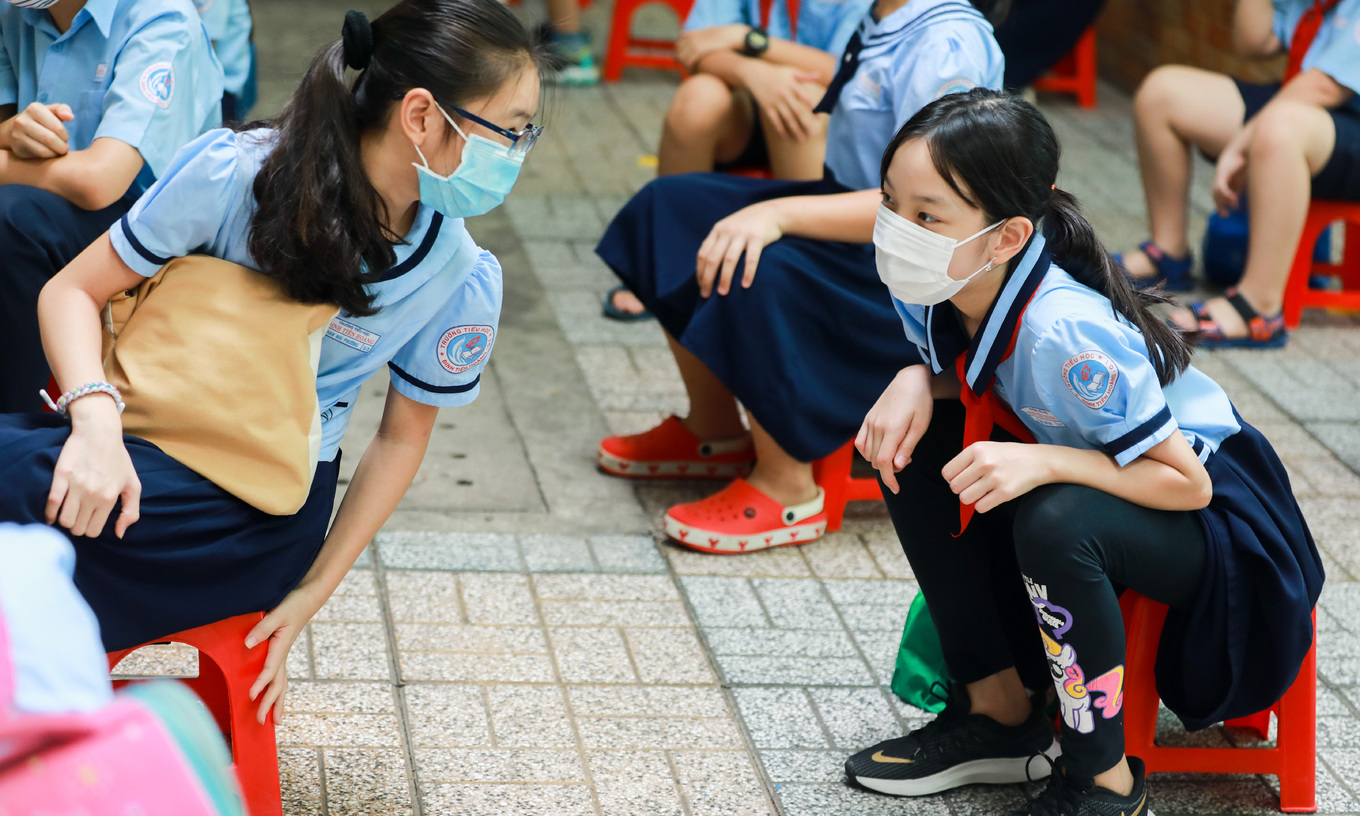 The flowers farmers are also expectedly affected. As festival activities, temples and pagodas were all canceled or closed, the demand for flowers are greatly reduced. It’s also because people are also afraid of the epidemic that will affect the economy so they start tightening expenses. The purchasing power of most flowers decreased by 30-40% compared to last year according to flowers farmers in Tay Tuu – Hanoi’s biggest flower village.

In 2019, Vietnam’s import revenue with China accounted for 38.7% of the total import turnover. After Lunar New Year, most Chinese factories hasn’t started operating back and it results in the lack of materials for production of many items in Vietnam such as textile and footwear. After the outbreak happened in China, Japan and South Korea were the two countries that many Vietnamese textile and electromechanical enterprises aimed to find suppliers to replace Chinese partners. But, at the moment, with the escalation of the COVID-19 outbreak in these two countries, many businesses feel helpless. There are not enough consumers nor suppliers, many factories must allow workers to have about 11% more days off work each month.

However, not every industry is influenced pessimistically. China again is the world’s main wood manufacturers.  Most of the wood furniture factories in this country have not yet worked back, or are operating in moderation. Therefore, big customers in the USA, Europe, Australia, Japan, etc. are interested in finding a replacement market, in Southeast Asia in general and Vietnam in particular. The CPTPP and EVFTA agreements will go into operation soon, it is going to increase connectivity and preferential tariffs between Vietnam and many countries around the world, expanding Vietnam’s export markets for timber.

With strong measures, Vietnam had controlled the outbreak well until 6/3, when the first infected case in Hanoi appeared, resulting in an additional 15 spread evenly in Quang Ninh, Hue, Quang Tri, Da Nang, Nha Trang and Ho Chi Minh provinces. Most schools in these areas has urgently announced closure again because of the changing situation. Aviation and tourism industries, which haven’t recovered yet, are now facing more heavy losses. While Vietnam has banned entries from China, South Korea and suspend visa exemption for Italy before, on March 9th, the Prime Minister issued a decision to suspend visa exemptions for eight European countries (Denmark, Norway, Finland, Sweden, England, Germany, France, and Spain) amid concerns about an outbreak there. On the following day, most of all tourism sites and a lot of hotels in Hanoi were closed and Cu Lao Cham, Ly Son islands stopped welcoming tourists temporarily. In order to minimize the impact of COVID-19, the Prime Minister approved a proposal from the Ministry of Finance on solutions to remove difficulties for production, business and market support such as: extending tax, land rent, reducing fees and charges. Banks have also registered more than USD 12.25 billion to launch preferential interest rate credit packages to support customers and businesses affected by the epidemic. In the near future, the Hanoi Department of Industry and Trade will corporate with units of the Ministry of Industry and Trade around the world to strengthen support for businesses to find new sources of raw materials and components for production.

The progress of the COVID-19 epidemic is increasingly complicated and unpredictable in the world and Vietnam in particular. The worst scenario is that an economic crisis will occur when the USD, Yen and Euro fall dramatically and China’s GDP is at a record low. Of course, Vietnam’s economy would also then be heavily affected by the domino effect. This might be the time to accelerate the process of economic restructuring by more strong and long-term sustainable development policies to avoid relying too much on China from input materials, investment projects to output markets.