The sign of diversifying need in the motorbike market 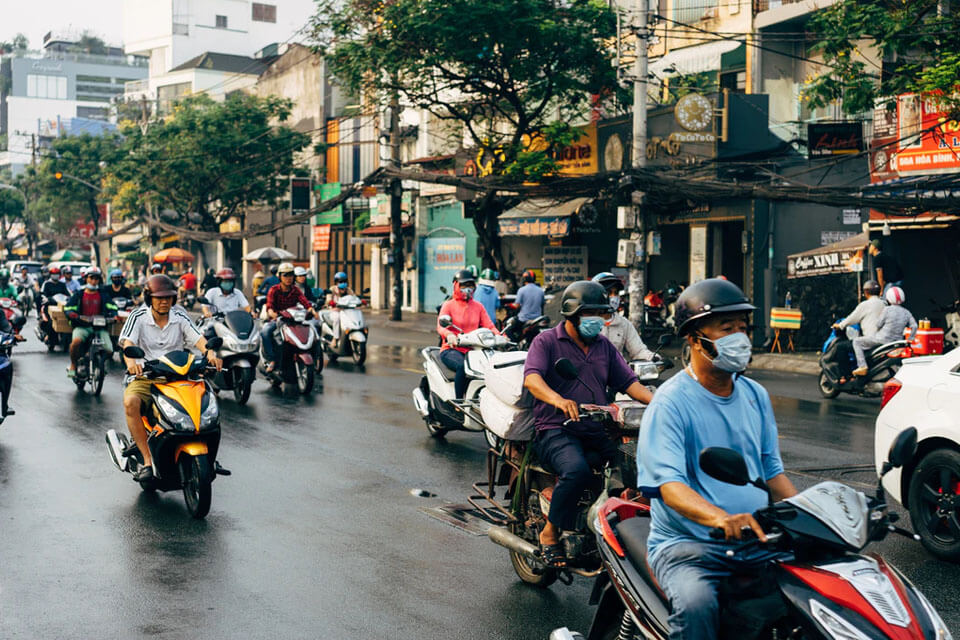 The Vietnamese population in 2014 reached 90 million while up to 37 million motorbikes have been registered. As demonstrated, the motorbike market is very large here. Vietnamese people feel it hard to live without a motorbike because the population is concentrated in large cities while roads are mainly narrow and public transportation has not been developed yet. The number of motorbikes sold domestically soared from 1.6 million units (1.4 billion USD) in 2006 to its peak of 3.23 million in 2011 and gradually decreased to 3.1 million in 2012 and 2.83 million in 2013 (2.85 billion USD). The market is getting closer to the state of saturation. The largest motorbike manufacturing corporates are Honda and Yamaha, which occupies over 90% of the market share in 2013 with sales volume of 1.87 billion dollars for Honda and 0.75 billion dollars for Yamaha. The total number of of Honda’s and Yamaha’s motorbike manufacture productivity exceeded 3.5 million units in 2013. 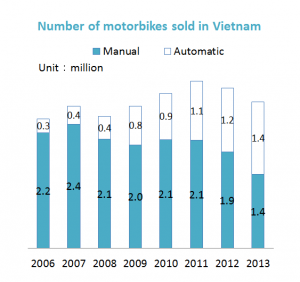 The average price of motorbike increased from 875 USD in 2006 to 1007 USD per unit in 2013. One of the main reasons is that Vietnamese is shifting their preference from manual to automatic motorbikes. The proportion of automatic motorbikes over the total number sold kept increasing from 30% in 2010 to 48% in 2013. Automatic motorbikes are becoming popular because of the simple operation and local consumers are more likely to purchase a higher quality of motorbike even if it is a little bit more expensive. Besides, while only some people such as the police could held an A2 license (which permits the drive of over 175 cc motorbike), common people also has been permitted to drive it since March 2014. Motorbikes with high displacement volume seem not to be very popular. However, this untapped segment is expected to undergo a change when the market develops further in the future.

Local tax system prevented Vietnamese from purchasing four-wheel vehicles, which has led to an unprecedented motorbike society. However, as expected result from free trade movements, Vietnamese vehicle landscape will be skewed to four-wheel vehicles in the country and two- wheel type will be diversified. In addition, with increasing added value, the vehicle industry in Vietnam will be a main exporting sector as a whole.