Out of office (TET Holiday)

The high speed of urbanization and busy lifestyles in big cities and their satellite towns has resulted in dramatic change in living habits. This consequently created greater demand for technology-based delivery services to save time. Moreover, Vietnam has witnessed significant rise in Internet penetration and a long-standing dining-out culture. In fact, a survey conducted in 2017 by Havas Riverorchid pointed out the reasons why Vietnamese order food delivery: convenience (65%), bad weather (25%), eating with a large number of friends (6%), variety of food (6%). Another notable factor that drives this market is the rising rate of smartphone adoption in Vietnam (72%), which enables consumers to order food right in their hand.

Established in July, 2015 by Vietnam’s domestic startup Foody, Now (previously known as DeliveryNow) had enjoyed great success with market dominating position for years.It is reported that Now had 10,000 orders per day during the middle of 2016.
The market became fiercer more than ever in 2018 with new players entering the market including domestic companies like Now, Lozi’s Loship, Vietnammm, Lixibook, Ahamove’s Lala along with international rookies like Grab’s GrabFood and Gojek’s GoFood.

Up to October 2019, active players are reported to be GrabFood, Now, GoFood, Baemin, Loship and Lixibook, and the market leader position has switched to GrabFood. Meanwhile, Lala, which being backed by Scommerce, suddenly announced their withdrawal after 1 year of operating in December 2018. Vietnammm, despite being one of the leading players for years and even acquired German rival Foodpanda in Vietnam market in late 2015, couldn’t hold their position and had to sell their business to South Korea’s new unicorn Woowa Brothers Corp, which opening the road for this foreign startup to penetrate Vietnam’s market as Baemin. The other two, Loship and Lixibook, have been quiet for months, which reflects the toughness and intense competitiveness of this market. 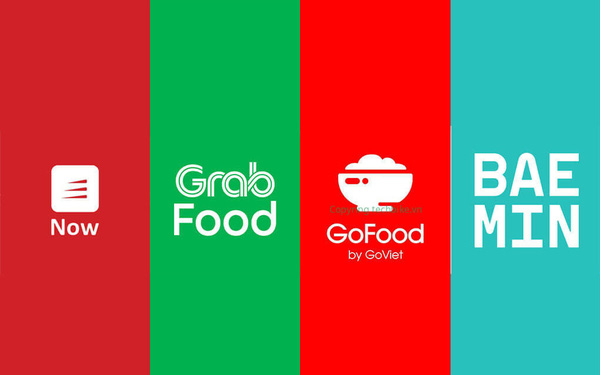 Since the moment GoFood joined this appealing market in November last year, they’ve continuously released promotion campaigns such as discounts up to 50% or free delivery within the first 5 km to attract customers. Consequently, Grab also started their promotion programs frantically to compete with the Indonesian player. The intense race between 2 rookies can also be seen in the way they invited famous local celebrities to be their ambassadors. Contrarily, the former market leader, Now, doesn’t intend to spend big money on superstars but focuses on appealing discount promotions. Baemin, despite stating that they didn’t have plans to burn the process, still gave away a series of promotion codes such as 70% discount for the first order, or a 50% discount for some famous brands.

Speed is undoubtedly the most influential factor. Both GrabFood and GoFood have respectively utilized their dense network of driver-partners from GrabBike and GoBike and use them as delivery agents. With 175,000 drivers in hand, GrabFood easily dominated the 1st position by 20-minute delivery speed while Now who had to recruit their own drivers came second with 25 minutes.

In our opinion, other factors that affects the race is “diversity of food” and “payment method”. Now currently has most partnerships with the restaurants thanks to their Foody ecosystem that have been running for 7 years. The late joiner GrabFood also has a considerably large number of partners owning to the strategy of quick registration process. They also run a unique campaign that allows some restaurants to only sell their food through GrabFood.

As cashless payment trend is emerging in Vietnam society, it became more convenient for customers to pay digitally for their food delivery orders. Now has caught up the trend for a long time as they allow consumers to pay not only by credit card, debit card, internet banking but also their own credits Now Credits and signed a partnership with e-wallet AirPay. GrabFood also makes use of their GrabPay by Moca to allow users to pay by their own cards. Meanwhile, GoFood who has less humble merchant-partners stills stick with traditional payment by cash.

GrabFood, which started its business in Ho Chi Minh City, has rapidly expanded its business to 14 regions of Vietnam in the seven months since its launch, making it the top company in the industry. However, after seeing the market leader being changed lots of times and the fall of some big players, both domestic and foreign, it is open to question how long GrabFood can remain their advantage position as new brands are entering and some giant logistic companies are aware of the appeal in this market.

Vietnam e-learning before and after COVID-19 outbreak

We are still open!